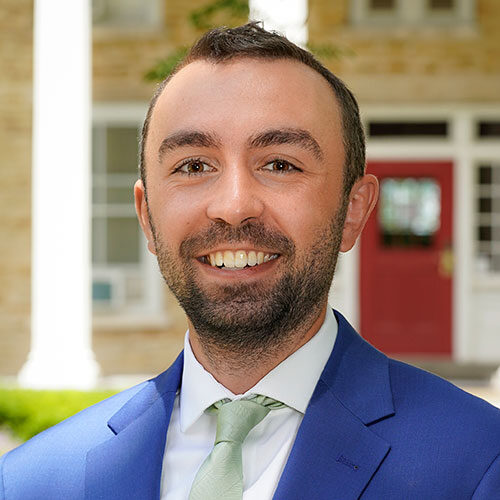 Originally from Peosta, Iowa, Brendan McCoy is a 2017 graduate from Ripon College with degrees in Economics and Sport Psychology. In his time as a student he was a member of the 2017 Midwest Conference Tournament Championship Men’s Basketball team, Student Athlete Leadership Team, and College Days student newspaper. He has been part of the Advancement team since concluding his time as a student a few years ago. Brendan’s responsibilities include prospect management and research, and leading stewardship efforts throughout the department.

Away from the office, Brendan enjoys golfing and spending time with his wife, Maddie, who is also a 2017 Ripon College graduate. Brendan and Maddie were married in Great Hall on the campus of Ripon College in the fall of 2018 and live in Ripon with their dog, Finn.

What do you love most about Ripon College and your involvement here? I love being able to watch students at Ripon College have the same incredible and well rounded experience that I had.

What advice would you give to a potential donor who is considering investing in Ripon? I would encourage you to look back on your time at Ripon College. What memories or lessons stand out to you as some of the most impactful of your lifetime?

Why do you think giving back is important to the advancement of Ripon and its students? I know that I would not have been able to attend Ripon without the support of alumni and friends.