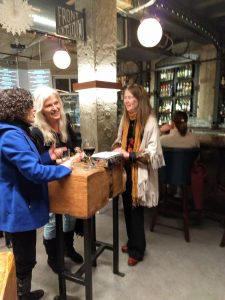 JONDI GUMZ ’75 class agent chats with well-wishers at her goodbye gathering after 26 years on the news staff at the Santa Cruz (California) Sentinel. Jondi won regional, state and national awards during her career as a reporter, the latest from the San Francisco Press Club, first place for a series of stories observing law enforcement training on how to respond to people in crisis due to mental illness and/or drug use. The training came in the wake of two fatal shootings by officers but since then, no officer-involved fatal shootings have taken place locally.