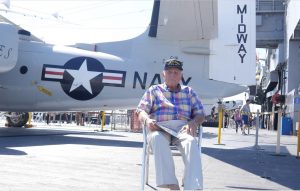 David Mirisch ’59 shown on the flight deck of the USS Aircraft Carrier THE MIDWAY which is permanently docked in the San Diego Harbor. For 10 years David was on its Board of Directors and his family produced the motion picture MIDWAY starring Charlton Heston and Henry Fonda.