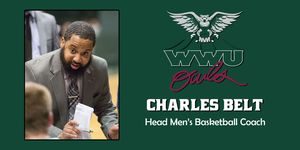 “I am pleased and excited to welcome Charles Belt to the William Woods university family,” stated Vittone. “I think he’ll make a great addition to our university and our community. I believe he’s the right fit at the right time for our university, department and men’s basketball program. I’m eager to watch our program grow under his leadership.”

“I’m extremely excited and blessed to be given the opportunity to join the William Woods University family as the head men’s basketball coach!,” commented Belt. “I want to thank Jason Vittone for his belief in me being the person to lead this program moving forward. I want to thank the entire athletic department staff, admissions, Dr. Mitchell and everyone who was a part of the search process for trusting and believing in me with this responsibility. I look forward to bringing an exciting brand of basketball to William Woods and the community of Fulton. We will recruit players with tremendous character who are eager to learn, grow and graduate. I can’t wait to get started. Go Owls!”

Belt comes to WWU after spending six seasons with the NCAA Division II Northern Michigan University Wildcats. He was the Head Assistant Coach for three seasons after spending three seasons as the second assistant. This past season, he helped lead the Wildcats to the GLIAC Tournament semi-finals. The team made their first post-season appearance in the 2017-18 season after an 11-year drought. In his six years with the Wildcats, the team garnered six all-GLIAC honors and 16 GLIAC academic awards.

Prior to NMU, Belt spent two seasons (2011-13) as an assistant coach at Beloit College. He helped lead the program from 17 conference wins in five years to 19 conference wins in two years. As a recruiter, he brought in a Midwest Conference honorable mention selection as a true freshman who ranked in the top 10 in seven statistical categories.

Belt also coached the boys 17U and 16U AAU Wisconsin Shooting Stars teams from the Ripon/Oshkosh, Wis. area and individual development camps for high school boys and girls in Wisconsin.

Belt played four years as the point guard for NCAA Division III Ripon College. He graduated from Ripon with a degree in business administration.