In Memory of Ann Wilson Wood ’54

ANN WILSON WOOD ’54 of Santa Barbara, California, died Nov. 18, 2021. At Ripon, she participated in Ver Adest and Kappa Sigma Chi. She graduated from the University of Minnesota and earned a credential in early childhood education from the University of California Berkeley Extension. She was a nursery school teacher and director, then parent coordinator for the University Children’s Center at the University of California Santa Barbara until retiring in 1998. She advocated for the education of young children as a frequent speaker and membership in several related organizations. She sang in the Santa Barbara Chorale Society for many years, performed music at La Mesa Community Church, and enjoyed camping at Yosemite National Park with her family. Survivors include three sons and one daughter.

Ann earned a credential in Early Childhood Education from UC Berkeley Extension and taught at St. Mark’s Nursery School in the 1970’s. She later moved to St. Michael’s Nursery School, where she served as Director from 1980 to 1988. After St. Michael’s was decommissioned, Ann served as Parent Coordinator for the newly-founded University Children’s Center at UCSB until she retired in 1998.

Ann was a tireless advocate for the education of young children throughout her career, serving as President of the Tri Counties Association for the Education of Young Children (TAEYC), President and Vice President of the Santa Barbara AEYC affiliate, as well as state and local AEYC positions. She was active in program accreditation, and served as a National AEYC Validator. Ann was a frequent speaker at Annual AEYC state and national meetings, focusing on children with special needs, literacy, and programmatic development.

Ann and Roger enjoyed a large circle of friends from many different arenas, and their gift of hospitality meant that their house was a center of activity and fellowship. Many of their children’s friends from high school or college choirs, sports teams, etc. have fond memories of being hosted at the Woods’. Ann was an accomplished musician, who passed her love of music to her children and many of her grandchildren. She sang in the Santa Barbara Chorale Society for many years, sang in the choir and played piano for productions at La Mesa Community Church, and enjoyed piano duet sessions with her dear friend, Carol. The entire family has fond memories of the dueling piano version of The Twelve Days of Christmas played by Ann and her son, Jim. Ann and Roger treasured summer camping trips in Yosemite, frequently in the company of their children, spouses, and dozen grandchildren, and though Ann had lasting effects from childhood polio, she hiked right along with the rest of the family. Roger called her “Leadfoot Annie”, and joked that the aerodynamic curves on her Ford Taurus station wagon were designed to evade radar detection. Ann mastered the space-time continuum to remain 29 years old, even while everyone else aged around her, proudly proclaimed through her email address [email protected]

Although a stroke robbed her of coherent speech for her last five years, Ann retained the radiant smile that charmed her caregivers and warmed the room. The family would like to extend a special thank you to Heritage House, Santa Barbara, for the loving care Ann received there.

Ann was preceded in death by her parents and by her beloved Roger in 2013. She is survived by her brother John Wilson (Jill), her four children: Jenny Hawkes (Ed Hawkes), David Wood (Jane Doughty), John Wood (Ruth), and James Wood (Jen), 12 grandchildren (Michael Hawkes, Stuart Hawkes, Erin Ayers, Sam Hawkes, Lyle Wood, Alex Wood-Doughty, Zach Wood-Doughty, Jim Wood, Marion Wood, Patrick Hawkes, Andrew Hawkes, and Levi Wood), and five great-grandchildren. An outdoor Celebration of Life is planned for Manning Park on April 30th at 1 pm, with a reception in the park to follow. All who have been touched by her life are welcome to attend. Contact [email protected] to RSVP, share memories, or ask questions about the service. 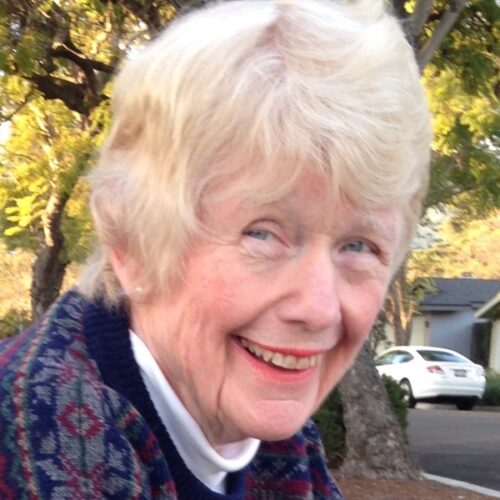